Judy is an award-winning advertising professional with more than 40 years of business experience in the Kansas City community.

After co-founding, then leading Montague-Sherry Advertising for 12 years, she eventually formed the Judy Sherry Consortium of professionals in the marketing and communications fields.

An honor roll of local and state organizations has recognized Judy’s talents and commitment, ranging from the Ad Club of Kansas City (its 1997 Silver Medal for contributions to the field), AARP (its 2014 Missouri Andrus Award for Community Service),

Mainstream Coalition (its 2017 Stand Up Speak Out Award) and even Major League Baseball (The Kansas City Royals’ Buck O’Neil seat in 2018).

Over the years Judy has been a prolific fundraiser for a variety of nonprofits including KCUR Public Radio and the AIDS Walk Kansas City. She’s also volunteered at the Food Pantry of Jewish Family Services of Kansas City, the KCMO Public School District and the National Council of Jewish Women Greater Kansas City Section.

Originally from Chicago, Judy graduated from the University of Missouri and has lived in Kansas City since 1960. She and her husband Steve of 61 years have two children and four grandchildren.

After decades working as an executive assistant at the University of Kansas Medical Center, Jan brings a wealth of experience to her role as GGS’s secretary-treasurer.

Her 40-year career at the medical center was concentrated in its department of orthopedic surgery where she served the department’s chair and coordinated its residency program. She retired in 2017.

Her interest in GGS started with a Lock It For Love event and led to recognition as Volunteer of the Quarter in 2020. Before joining the Board, Jan staffed the GGS office coordinating LIFL sign-ups and materials, managing Community Forum mailings and tracking inventory of GGS spirit wear.

Jan’s a member of the Johnson County League of Women Voters, concentrating on voter registration, and has been a poll worker the past five years for the Johnson County Election Office. She was also active in the Shawnee Mission School District’s PTA during her children’s school years. Her daughter is a nurse at KU Med Center and her son works in the oil and gas industry in Houston. Jan also has four grandchildren.

A native Kansas Citian and an attorney, Carla is also a former federal prosecutor who taught criminal justice and criminology for 10 years at the University of Missouri-Kansas City, her alma mater.

As a federal prosecutor for the Western District of Missouri, Carla focused on white collar crime and later worked as a civil attorney in bankruptcy and landlord tenant litigation.

Along with her professional career, Carla has been an active volunteer in a wide range of community organizations. She serves on the local boards of The Whole Person, the Good Faith Network and the National Council of Jewish Women-Kansas City section where she was also president. Carla also volunteers at Happy Bottoms, Nourish KC, the Food Pantry at Jewish Family Services and the KC Pet Project.

The Heartland Coalition Against Gun Violence, a program of GGS, co-hosts the annual Community Forum on gun violence prevention, and Carla chairs its planning committee.

She and her husband Scott have lived in Leawood for 25 years and have three grown children. 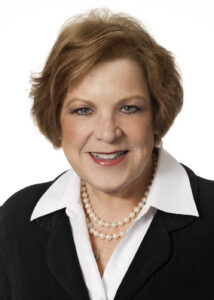 Carol Gee enjoyed a storied 40-year career in branding and communications including 25 years at DuPont, a perennial member of the Fortune 500 and now operating as Dow DuPont.

As its global brand manager, Carol helped DuPont build its LYCRA and CORIAN brands into consumer icons recognized around the world. She later left DuPont to join a fellow DuPont executive when he became CEO of glass packaging manufacturer Owens-Illinois in Toledo, OH. She served as its chief communications officer for five years.

During her years in Toledo, Carol served on the boards of United Way’s Women’s Initiative Board, the Black Swamp (land) Conservancy, the Toledo Hospital Foundation and the Way Library Foundation.

An advertising graduate of the University of Missouri’s School of Journalism, Carol moved to Kansas City to be closer to her two sisters after retiring in 2014. Her volunteer career, however, has continued. She serves as a board member of the Unicorn Theatre, a trustee for Lincoln College in Lincoln, IL, a Deacon at Village Presbyterian Church and communications chair for Grandparents for Gun Safety.

Lock It For Love/Development – Barb McNeile

Barb’s skills of meticulous organization and attention to detail as a former executive director of another all-volunteer nonprofit helped bring to life Lock It For Love, GGS’ signature educational program for the safe storage of firearms. Her marketing background has bolstered GGS fundraising and development efforts as well.

A native Kansas Citian, Barb graduated from the University of Missouri with a bachelor’s degree in business administration and later a master’s in the same field from Saint Louis University. Her business career included 14 years with AT&T in Kansas City and St. Louis plus another 13 years in real estate with Prudential Kansas City Realtors.

Barb’s years of volunteering and holding leadership positions span a broad spectrum in the community including the Pinehurst Estates Homes Assoc., every level of PTA in the Shawnee Mission School District, the University of Southern California’s KC Parent/Alumni Chapter, United Way of Greater Kansas City and her ongoing involvement with the Johnson County Christmas Bureau, where she was executive director for four years.

She and Jim, her husband of 42 years, have two sons and two grandchildren all living in California.

Leading the committee that presents GGS monthly programs, Julie brings many skills of the teacher she was for 22 years. The committee generates ideas for topics, engages relevant speakers, organizes discussion panels and plans the format each program will follow.

For three years Julie worked as executive secretary-treasurer of the Shawnee Mission Meals on Wheels program. She oversaw an operation of about 40 volunteers who delivered regular meals to some 70 clients five days a week.

She and her husband Tom of 54 years returned to Overland Park in 2013. They have a son, a daughter and five grandchildren. 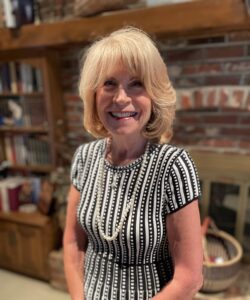 Joan is a retired French teacher and high school counselor whose passion has always been working with children of all ages.

She grew up in Northbrook, Illinois, and received a bachelor’s degree in French and English Education from the University of Wisconsin-Madison and a master’s degree in School Guidance and Counseling from Northeastern Illinois University in Chicago. Joan’s 38 years in education included teaching and counseling positions in Northbrook and the Shawnee Mission School District.

As in teaching, Joan’s volunteering has focused on improving children’s lives. She has mentored underserved children, advocated for children in the court system as a CASA volunteer and promoted gun safety through GGS. School settings are her favorite work environment where she’s given presentations on bullying to young children and on dating violence to teens.

She and her husband Alan have lived in Overland Park since 1977. They’ve been married 50 years and have two children and three grandchildren living in Denver, Colorado.

Lisa’s professional skills and personal commitment have helped a variety of nonprofits grow in fundraising and programming in the fields of health, education, community service and the arts.

In 2001 she began working for the Hospice Foundation of America and is now its senior vice president for education. She also serves as managing editor of its print publications and website content for consumers and professionals.

At the same time, she’s also worked as a nonprofit development consultant, writing and editing grant applications. Her current and/or previous nonprofit clients have included the Religious Coalition for Reproductive Choice, Sesame Workshop, Mid-America Arts Alliance and Theatre for Young America, among others.

A Kansas City native and graduate of Shawnee Mission East High School, Lisa received her undergraduate degree in English from Grinnell College and later a master’s in fine arts in theatre administration from the Yale School of Drama. She returned to the area in 2001 and has served on the boards of the Coterie Theatre and Mainstream Coalition plus various committees at Village Presbyterian Church.

Her son and daughter attend Tufts University in Boston.

Maribeth’s commitment to service began with her community-minded family in Ottawa, KS, and which led in part to her majoring in social work at Baker University. That same desire to improve peoples’ lives continues today with her helping the homeless through the volunteer-driven Free Hot Soup and serving on GGS’s communications and Community Forum planning committees.

In addition to her community involvement, Maribeth works fulltime as an outside sales representative for General Mills. She and her husband Alan live in Shawnee.