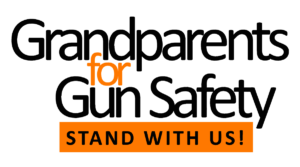 The local nonprofit formerly known as Grandparents Against Gun Violence has adopted a new name to better reflect its emphasis on gun safety and responsible gun ownership: Grandparents for Gun Safety, Stand With Us! (GGS)

The new name and tagline were announced by President Judy Sherry who founded the group eight years ago after the mass shooting at Sandy Hook Elementary in Newton, CT.

“Most people feel more comfortable and energized being for something rather than being against something. From the very start, and still true today, we are not against guns; we are for gun safety,” Judy said. “And our new tagline of Stand With Us! emphasizes our wanting to work with people of all ages and political outlooks to ensure we all feel safe from firearms injuries and deaths.”

From its beginning, the all-volunteer organization has focused on education and safety. It hosts informative monthly programs exploring different facets of firearm violence featuring local speakers from education, law enforcement, medicine, the arts and government, among others.

An estimated 4.6 million American children live in homes with guns that are both loaded and unlocked, according to Everytown for Gun Safety. Every day, 16 children (the majority under age 15) are hospitalized with gunshot wounds, according to information from the American Academy of Pediatrics and The Agency for Healthcare Research & Quality.

GGS is an all-volunteer, 501-c-3 organization. For more information on volunteering and contributing, visit its website at grandparentsforgunsafety.org